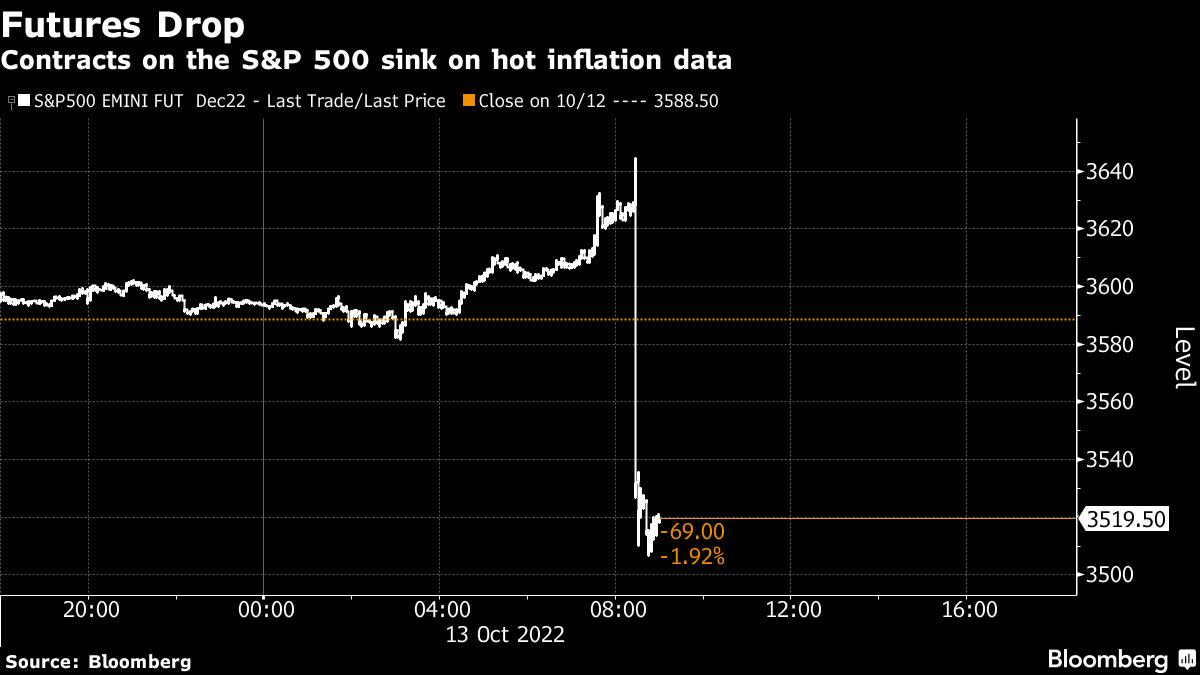 (Bloomberg) — Wall Street hopes that the Federal Reserve might be able to ease up on its battle against inflation later this year were decisively dashed Thursday when consumer price index data for September came in unexpectedly hot. Core CPI, which excludes food and energy, increased 6.6% from a year ago, the highest level since 1982.

“Horrible CPI number,” said Andrew Brenner, the head of international fixed-income at NatAlliance Securities. He wondered what the Fed might have to do on interest rates: “Will they go 100 basis?”

Here’s what other analysts were saying:

“There can’t be anyone left in the market who believes the Fed can raise rates by anything less than 75bps at the November meeting. In fact, if this kind of upside surprise is repeated next month, we could be facing a fifth consecutive 0.75% hike in December with policy rates blowing through the Fed’s peak rate forecast before this year is over.”

“The composition of the inflation reading is perhaps even more worrisome than the overall number. Increases in shelter and medical care indices, the stickiest segments of the CPI basket, confirm that price pressures are extremely stubborn and will not go down without a Fed fight.”

“This report raises the risk that we may see a new cycle high in headline inflation before the end of the year. With energy prices moving back up, a mid-90s oil price in December could see us surpass the 9.1% headline peak from June.”

“Looking at the components, what is most worrying is the big jump in services. Service inflation is the most sticky. This is where both shelter prices and wages reign supreme.”

“Stronger report on headline and core so the market move makes sense. The market pricing for the terminal rate was 4.66% before the report, now at 4.7% and this can keep nudging higher. We are looking for 5% terminal (effective of 4.83%).

“This isn’t the CPI report markets or the Fed were hoping for. Inflation pressures remain stubbornly high in spite of some softening in areas which were particularly affected by the pandemic.”

“I do not think this changes much for the Fed, just that it lowers the idea of a Fed pivot. They’re likely to continue hiking at large 75bp clip in November, and increases the risk of another 75bp for December. Though we’re of the view that they will do 50bp. As they get further into restrictive policy territory, they will become less hawkish in terms of the pace of rate increases given they have hiked so much this past year and rising concerns about financial stability.”

Ian Lyngen, head of US rates strategy at BMO Capital Markets said in a note:

“While there is sure to be chatter on the potential for a 100 basis point hike, this print cements 75 basis point in November with the more relevant question whether December and February’s hikes will be upsized.”

“This print raises the level of uncertainty and is bad news for the economy overall, but for consumers in particular. The peak in interest rates will, in all probability, be higher now. It’s difficult to find any positives in this for the economy or markets.”

“If ever there is a time for people who to do economic forecasting to be humble, this is it. It’s very, very difficult — the falling off of inflation for core good has taken so much longer than we expected.”