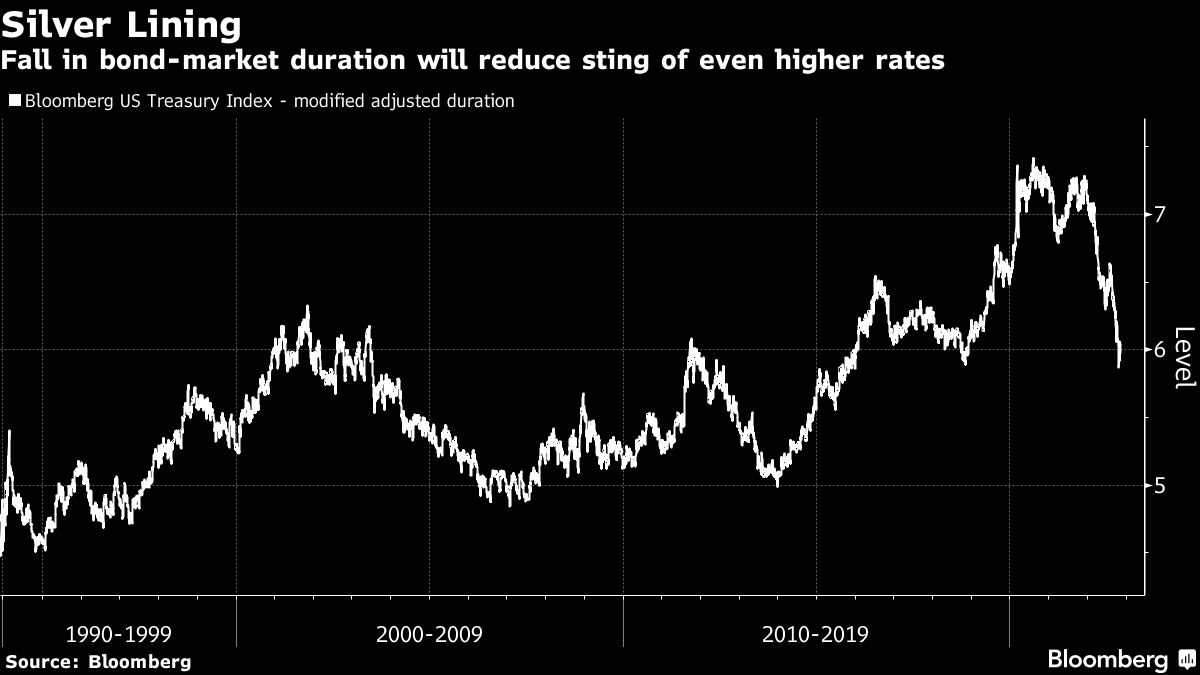 (Bloomberg) — The historic bond selloff has wreaked havoc across global markets all year, while fueling a crisis of confidence in everything from the 60-40 portfolio complex to the world of Big Tech investing.

Now, heading into a possible economic downturn, the near-$24 trillion Treasury market is looking less dangerous all of a sudden.

The latest US consumer price data suggest inflation may be cooling at long last, driving investors back to the asset class in droves on Thursday as traders pared bets on the Federal Reserve’s hawkishness. Another reason why this once-reliable safe haven appears safer than it has in a while: Even rising interest rates have less power to crush bond portfolios like they have over the past two years.

Just look at duration, which measures the sensitivity of bond prices to changes in yields. It’s a tried-and-tested gauge of risk and reward that guides all flavors of fixed-income investing — and it’s fallen sharply this year.

With the Fed’s aggressive policy-tightening campaign this year pushing Treasury yields to around decade-highs, the margin of safety for anyone buying US debt right now has improved notably compared with the low-rate era, before the bull market collapsed in the inflationary aftermath of the pandemic.

Thanks to higher yields and coupon payments, simple bond math shows duration risk is lower, meaning a fresh selloff from here would inflict less pain for money managers. That’s a merciful prospect after two years of gut-wrenching losses on a scale largely unseen in the modern Wall Street era.

“Bonds are getting a bit less risky,” said Christian Mueller-Glissmann, head of asset allocation strategy at Goldman Sachs Group Inc., who shifted from underweight positions in bonds to neutral at the end of September. “The total volatility of bonds is likely to fall because you don’t have the same amount of duration, and that’s healthy. Net-net, bonds are becoming more investible.”

Consider the two-year Treasury note. Its yield would need to rise a whopping 233 basis points from before holders would actually incur a total-return loss over the coming year, primarily thanks to the cushion provided by beefy interest payments, according to analysis conducted by Bloomberg Intelligence strategist Ira Jersey.

With higher yields, the amount an investor is compensated for each unit of duration risk has risen. And it’s increased the bar before a further rise in yields creates a capital loss. Higher coupon payments and shorter maturities can also serve to reduce interest-rate risk.

And take the Sherman ratio, an alternative measure of interest-rate risk named after DoubleLine Capital Deputy Chief Investment Officer Jeffrey Sherman. On the Bloomberg USAgg Index, it’s increased from 0.25 a year ago to 0.76 today. That means it would take an 76 basis-point rise in interest rates over one year to offset the yield of a bond. A year ago it would have taken just 25 basis points — equivalent to a single regular-sized hike from the Fed.

All told a key measure of duration on the Bloomberg US Treasury index, which tracks roughly $10 trillion, has fallen from a record 7.4 to 6.1. That’s the least since around 2019. While a 50 basis-point rise in yields inflicted a more than $350 billion loss at the end of last year, today that same hit is a more modest $300 billion.

That’s far from the all-clear, but it does reduce the downside risk for those wading back into Treasuries attracted to the income — and the prospect that lower inflation or slowing growth will increase bond prices ahead.

After all, cooling US consumer prices for October offer hope that the biggest inflation shock in decades is easing, in what would be a welcome prospect for the US central bank when it meets next month to deliver a likely 50 basis-point increase in benchmark rates.

The counterpoint is that buying bonds is far from a slam-dunk trade given the continued uncertainty over the inflation trajectory while the Fed is threatening further aggressive rate increases. But the math does suggests investors are now somewhat better compensated for the risks across the curve. That, along with the darkening economic backdrop, is giving some managers the conviction to slowly rebuild their exposures from multi-year lows.

“We’ve been covering duration underweights,” said Iain Stealey, CIO for fixed income at JPMorgan Asset Management. “I don’t think we are completely out of the woods yet, but we are definitely closer to the peak in yields. We are significantly less underweight than we were.”

And of course the recent rally suggests an asset class that’s fallen sharply out of favor over the past two years is finally turning the corner.

The defining narrative of 2023 will be “a worsening labor market, a low growth environment and moderating wages,” BMO strategist Benjamin Jeffery said on the firm’s Macro Horizons podcast. “All of that will reinforce this safe-haven dip-buying that we argue has started to materialize over the past few weeks.”

–With assistance from Sebastian Boyd and Brian Chappatta.