Miami to escape the home price correction in 2023 while ‘overheated’ housing markets like Austin get hammered, says Goldman Sachs 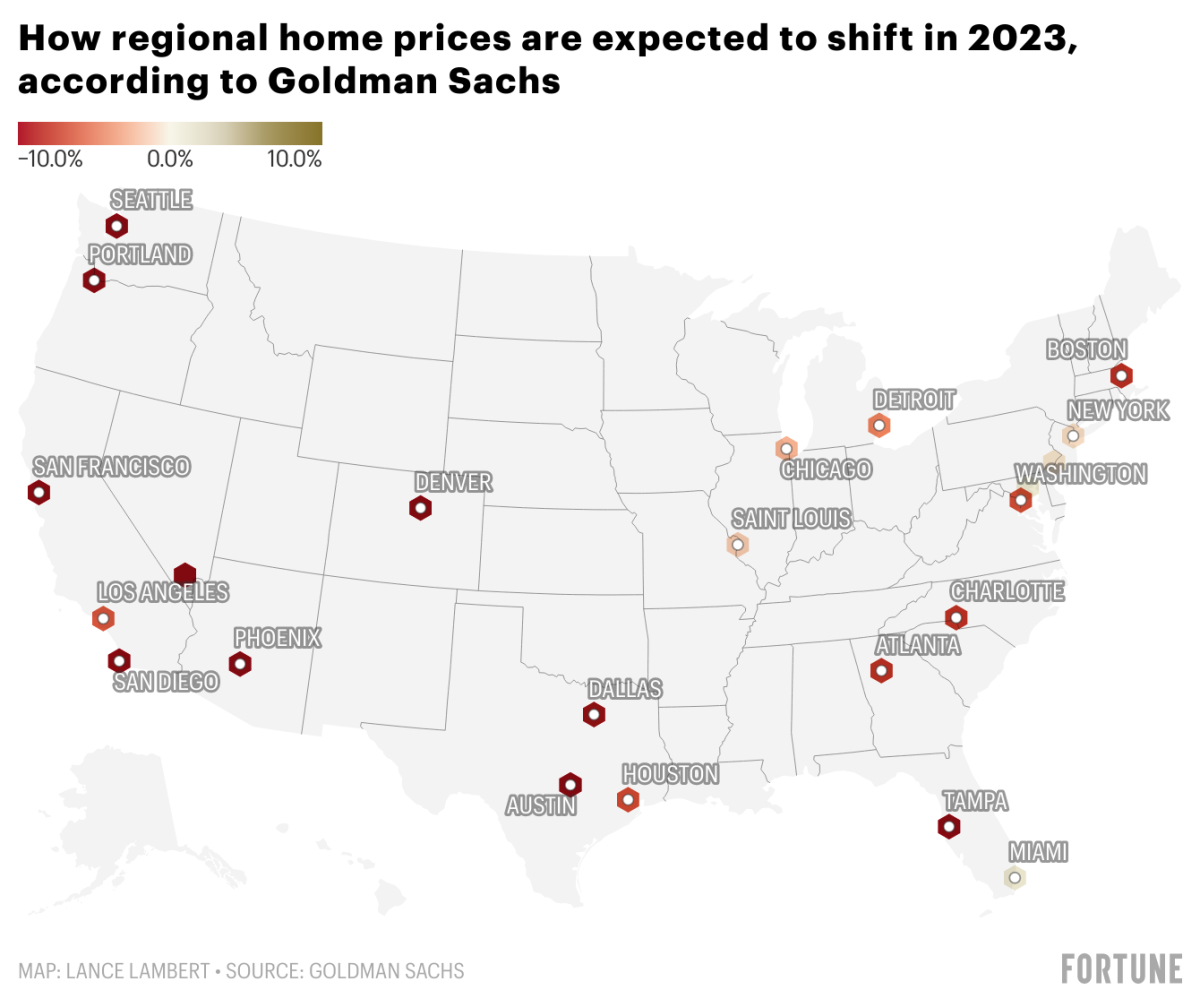 The Fed’s ongoing inflation fight—which saw mortgage rates spike from 3% to 6% in 2022—has set off the second biggest home price correction of the post-WWII era.

On one hand, the 2.4% drop in U.S. home prices seen between June and October is small relative to the housing crash’s 26% national home price decline from the top in 2007 to the bottom in 2012. On the other hand, the ongoing home price correction might have a lot of gas left in the tank.

Look no further than a Goldman Sachs paper put out last week with the title “Getting worse before getting better.” Researchers at the investment bank argued in the paper that the national home price correction will continue through 2023.

“We are lowering our 2023 forecast for year-over-year depreciation in the Case-Shiller Home Price Index to -6.1% from -4.1% previously. This would represent an aggregate peak-to-trough decline of roughly 10% in U.S. home prices through the end of this year from June 2022,” write Goldman Sachs researchers.

Through October, the lagged Case-Shiller National Home Price Index has registered a -2.4% national home price decline. However, researchers at the investment bank estimate once we get the November and December readings, we’ll see national home prices are already down -4%. That means we might already be half-way to Goldman Sachs’ estimated 10% peak-to-trough decline.

Nationally, a 10% peak-to-trough decline in U.S. home prices—which climbed 41% between March 2020 and June 2022—shouldn’t do too much financial damage, says Goldman Sachs. However, the firm says some regional markets won’t be so lucky.

“This [national] decline should be small enough as to avoid broad mortgage credit stress, with a sharp increase in foreclosures nationwide seeming unlikely. That said, overheated housing markets in the Southwest and Pacific coast, such as San Jose MSA, Austin MSA, Phoenix MSA, and San Diego MSA will likely grapple with peak-to-trough declines of over 25%, presenting localized risk of higher delinquencies for mortgages originated in 2022 or late 2021,” writes Goldman Sachs.

View this interactive chart on Fortune.com

Why does Goldman Sachs expect the correction to deliver the biggest blow to markets like San Diego and Austin? The investment bank says those markets are “overheated,” which implies that home price growth there got too detached from fundamentals during the Pandemic Housing Boom. Being detached from fundamentals packs a particularly hard punch when mortgage rates spike like they did in 2022.

Heading forward, Goldman Sachs thinks many Northeastern, Southeastern, and Midwestern markets could see milder corrections (if any correction at all). In 2023, the investment bank expects home prices to barely fall in places like Chicago (-1.8%) and New York (-0.3%), while its forecast has home prices rising in Baltimore (+0.5%) and Miami (+0.8%) in 2023.

View this interactive chart on Fortune.com

“Our 2023 revised forecast primarily reflects our view that interest rates will remain at elevated levels longer than currently priced in, with 10-year Treasury yields peaking in 2023 Q3. As a result, we are raising our forecast for the 30-year fixed mortgage rate to 6.5% for year-end 2023 (representing a 30 bp increase from our prior expectation),” write Goldman Sachs researchers. “This path would cause affordability to worsen incrementally, after a slight improvement over the past two months.”

“Assuming the economy remains on the path to a soft landing, avoiding a recession, and the 30-year fixed mortgage rate falls back to 6.15% by year-end 2024, home price growth will likely shift from depreciation to below-trend appreciation in 2024,” writes Goldman Sachs.